I’m happy to report I’ll be presenting at the 2019 Cheiron Conference on the History of the Behavioural & Social Sciences. This time, my topic will be the debate about the “specious present” in Augustine of Hippo & William James.

While that might sound like an anachronistic comparison, the ancient African Christian and the modern American psychologist actually tend to ask quite similar sorts of questions. In this case, the parallel lies in the present. Both thinkers asked themselves: is there such a thing as a “present moment?”

Augustine answered in the negative. James mostly answered in the positive, though he admitted that ‘in reality’ the present probably did not exist. And yet he cautioned that the psychologist must presume a present, insofar as the scientific psychologist relies upon the notion of a ‘present state of consciousness’ in order to make a judgment, offer a diagnosis, and so on.

The goal of my paper, then, will be both to highlight this distinction between Augustine & James and to explore some consequences of this distinction. We could, for example, ask: might there be any psychological consequences if we presume from the beginning, not that we occupy a specious present, but rather that there is no present at all? And if so, can we continue to speak intelligibly of spontaneity, a moment of decision, an instant of change, or perhaps even a ‘present mental state?’

At long last, I’ve just registered to present at the Canadian Congress of the Humanities and Social Sciences for the first time. I’ll be presenting my research before the Canadian Society of Patristic Studies.

The title of my paper will be “The Killing Spirit: Augustine’s Anti-Manichaean Reception fo the Apocryphal Act of Peter.” It’ll consist of my reading of Augustine’s strange use of that particular apocryphal text in his Contra Adimantium, a little-studied tome that aims to undermine the claims of the Manichaean polemicist Adimantius.

In this fragmentary apocryphon, Peter adopts a controversial stance regarding the status of his own child, who appears to become a pawn in the game of the divine’s demonstration of its own power. In the polemical context of the Contra Adimantium, however, this Act becomes a point of contention in view of the Manichaeans’ rejection of certain “scriptural” texts in favour of others, despite their liminal status within the canonical debates of late antiquity.

Sometime in 2019 or (more likely) 2020, the Journal of Early Christian Studies will publish my article “Nineveh Overturned: Augustine & Chrysostom on the threat of Jonah.” This was a tough piece to write, since I had to dig much deeper than I had previously into the Greek exegetical tradition concerning Jonah. This research began as part of an initiative launched by the Oriental Institute at the University of Chicago, which led to a panel at the Society of Biblical Literature some years back. The final version of my argument, having been tested by some really thoughtful feedback from the journal’s reviewers, should be much stronger than those tentative first steps at SBL.

Both John Chrysostom and Augustine of Hippo find in the story of Jonah and the Ninevites an invitation to reflect upon the moral and political challenges undergone by cities facing the possibility of disaster. While Nineveh was threatened with destruction at the hands of the divine, cities like Constantinople and Rome were instead threatened with disaster of a natural or military kind, ranging from earthquakes to invasions. Regardless, both Chrysostom and Augustine thought the lessons of Jonah could be applied to contemporary crises. The two pastoral preachers did so in quite different ways, however. For Chrysostom, the repentance of the Ninevites in the face of a divine threat served as a model for his own congregation. For Augustine, however, the divine was incapable of uttering threats, and so Jonah’s prophecy had to come true: Nineveh had to be overturned. In order to make this case, Augustine reconfigured the meaning of the word “overturning” (euersio), so that he could make the case that the repentance of the Ninevites was driven not by their fear, but rather by the combined agency of divine grace and political coercion. 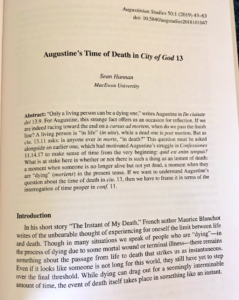 My article on “Augustine’s Time of Death in City of God 13″ has now been printed in the journal Augustinian Studies. Thanks go out to Dr. Jonathan Yates (Villanova) & the rest of the editorial team over there. The argument put forward here was forged in dialogue with scholars at Villanova’s Patristic, Medieval, & Renaissance conference, as well as with my colleagues at MacEwan University and (previously) the University of Chicago.

Here’s the abstract for the piece:

“Only a living person can be a dying one,” writes Augustine in De ciuitate dei 13.9. For Augustine, this strange fact offers us an occasion for reflection. If we are indeed racing toward the end on a cursus ad mortem, when do we pass the finish line? A living person is “in life”, while a dead one is post mortem. But as ciu. 13.11 asks: is anyone ever in morte, “in death?” This question must be asked alongside an earlier one, which had motivated Augustine’s struggle in Confessiones 11.14.17 to make sense of time from the very beginning: quid est enim tempus? What is at stake here is whether or not there is such a thing as an instant of death: a moment when someone is no longer alive but not yet dead, a moment when they are “dying” in the present tense. If we want to understand Augustine’s question about the time of death in ciu. 13, then we have to frame it in terms of the interrogation of time proper in conf. 11.

A bit earlier in 2019, I was fortunate enough to have my book proposal accepted by Bloomsbury press, making me a quasi-colleague of fellow Bloomsbury author J.K. Rowling. (Kidding! About that last part, anyway…)

If all goes according to plan, I’ll submit the completed manuscript by the end of this (very busy) summer. The title of the work will be Reading Augustine: On Time, Change, History, and Conversion. As its name implies, it will be part of Bloomsbury’s Reading Augustine series, overseen by the estimable Dr. Miles Hollingworth.

For a blurb hinting at the book’s content, you need look no further than here:

Life in the twenty-first century tends to move at a breakneck pace. As the 24-hour cycle of cable news contracts down to the 24-minute (or 24-second) cycle of social media, most of us are left with the sense that there is never enough time to catch up with our ever-changing world. It would be nice if we could grab hold of time and make it sit still for a while, if only for the chance to catch a better glimpse of our own personal or historical situation. Yet tomorrow’s volatility always arrives to overturn today’s fragile status quo.

These troubles with time are not new, however. Already in late antiquity, as the Western Roman Empire crumbled around him, Augustine of Hippo realized that this disorientation we feel in the face of change is a symptom of a deeper problem: namely, that we don’t really know what time is, even though it conditions every facet of our lives. In On Time, Change, History, and Conversion, the aim is to offer a new interpretation of Augustine’s approach to temporality by contrasting it with contemporary accounts of time drawn from philosophy, political theology, and popular science. Rather than offering us a deceptively simple roadmap forwards, however, Augustine reminds us that, before we try to transform ourselves and our world, we first must face up to the question of time itself.

Wish me luck this summer!

At long last, it’s time to get back to work on this site. After creating it & populating it with some research findings during my first year on the tenure-track here at MacEwan University, I then turned my attention to figuring out how to teach a pretty broad range of courses, from HIST 101 (World History Before 1500) to HIST 476 (Secrets of Early Christianity) and everything in between. In the meantime, I’ve also tried to develop a bit more research on the side, on both the late antiquity & digital humanities fronts. As I enter into my third summer as an Assistant Professor at MacEwan, it seems like the time is ripe for me to take a fresh look at this site & start making the necessary updates. So stay tuned for incoming developments soon… 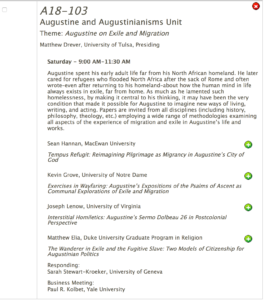 It looks as though finally registering for the 2017 Annual Meeting of the American Academy of Religion paid off: my name is now included as part of our panel! No longer shall I be known as “Unregistered Participant.”

My presentation this November will represent a bit of a departure for me. Whereas I usually focus on Augustine’s place in the history of the philosophy of time, this time I’ll be zeroing in on what exactly Augustine means when he writes of peregrinatio or (as it’s usually rendered) “pilgrimage.”

Here’s the short version: the problem with translating this term as “pilgrimage” is that it too readily evokes the image of devotion to the cult of the saints (e.g., a pilgrimage to the relics of St. Stephen, etc.). But the term’s origins go back further than that, more commonly denoting the experience of any migrant, exile, or (at times) even tourist.

My question is: What if we re-translated peregrinatio as “migrancy” in key texts of Augustine’s, such as City of God I? Out of that, further questions grow: Would we get a better sense of what it means to be a (so-called) “pilgrim” in this life? Would we better understand the resonances connecting the migrant experience to the Christian sensibility expressed so memorably in the words of Augustine?

It is my earnest hope that the answer to that last question is: “Yeah, pretty much!”

[H/T to the heroic organizers of the Augustine & Augustinianisms section at AAR, Dr. Matthew Drever and Dr. Paul Kolbet. Great guys, the both of ’em!] 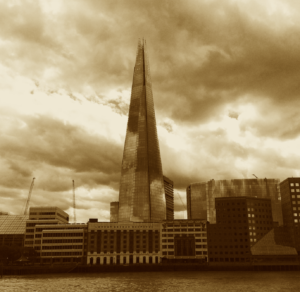 To complete the trifecta, here’s the other piece I’ve contributed to the University of Chicago Divinity School’s Craft of Teaching blog:

Rather than figuring out the finer points of digital pedagogy or reflecting on the status of academic labour, this post aimed to think through the potentially alienating but ultimately rewarding experience of alternating between great-books-style teaching and survey-style lecturing. My position at MacEwan allows me to teach in both styles, which (as I’ve learned) can be really beneficial both for me and (more crucially) for my students. 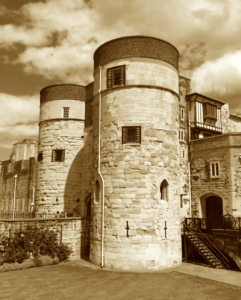 Here’s something I wrote in light of recent debates about the role that unionization can play in the recognition of academic work as labour:

If you’d like to read more about the advances of graduate student unionization, check out the work being done by Graduate Students United at the University of Chicago.

On the other end of the spectrum, if you’d like to read about the perils of poorly strategized unionization, take a look at the collective bargaining situation at the University of Calgary.