Last week, I was very fortunate to get the chance to present at the Mysticism & Lived Experience Network’s annual conference. The theme this year was “Charity and Poverty in the Lives & Works of Medieval Mystics.” While hosted in the UK, the event was conducted via Zoom.

My own talk focused on the figure of ‘Queen Poverty’ & the approach to private property found in the writings of the fourteenth-century Dominican mystic Catherine of Siena. Building on the work of Eloise Davies, I tried to demonstrate that Catherine’s use of key terms like carità involved sharp-edged economic critiques of the society in which she was living. Here I was also trying to expand upon some themes first explored in Ch. 5 of my recent book with W. Ezekiel Goggin, Mysticism and Materialism in the Wake of German Idealism.

The best part of the conference, of course, was learning from all of the other participants, who presented on everything from William of St.-Thierry to Margery Kempe. Sadly, due to the massive time-zone difference, I wasn’t able to attend every talk, though I look forward to digging deeper into each scholar’s research over the coming months.

Just this morning, I delivered a talk on “Pilgrimage, Migrancy, & Time According to Augustine of Hippo” at the Implicit Religion UK conference on “Time, Chaos, & Order.” The Implicit Religion project, hosted at Bishop Grosseteste University in Lincoln, is indebted to the life & work of Edward Bailey, who pioneered this unique methodology during the twentieth century.

My goal in this talk was to connect my previous work on Augustine’s philosophy of time (as distentio) with my more recent (& future) work on Augustine’s description of temporal experience in terms of peregrinatio (traditionally translated as ‘pilgrimage,’ but better translated — at least in my view — as ‘migrancy’ or something closer to the experience of actual refugees).

Here’s a brief snapshot of the opening of my talk:

Overall, I’d say this conference has been quite a success. Not only has Francis Stewart brought together scholars from diverse fields (Philosophy, Sociology, History, Economics) to discuss religion & the secular (& the spaces in between); Stewart has also done well to foreground the work of students through generative “scratch sessions” that amplify the voices of burgeoning scholars. It’s been a wonderful event.

This April 6 at 3 p.m. MDT, I’ll be giving another talk rooted in the research Dr. W. Ezekiel Goggin & I conducted for our book Mysticism & Materialism in the Wake of German Idealism (Routledge, 2022). More specifically, I’ll be focusing on Chapter 2, where we explore the interests of Romantic-era German authors like Franz Xaver von Baader in medieval mystics like Meister Eckhart. The talk will also revolve around the idea of the University of Ingolstadt — an institution linked both to Baader & to Mary Shelley’s Victor Frankenstein — as a locus for esoterica near the dawn of the nineteenth century.

The lecture will be part of our History Bites series here within MacEwan University’s Humanities Department. I am thankful to my colleague Dr. Aidan Forth for arranging this event.

I’m also being named to serve on the Board of Editors of Religious Studies & Theology, although it may take a bit more time for them to update the Equinox website to reflect that fact. I’m looking forward to learning more about what goes into the making of the journal from the editorial vantage-point, while also continuing to build up our Twitter presence.

My co-author Dr. Zeke Goggin & I were overjoyed to receive another new blurb for our forthcoming book, Mysticism & Materialism in the Wake of German Idealism (Routledge, 2022).

We’re grateful to Prof. Françoise Meltzer (University of Chicago) for taking the time to formulate such a positive statement about our work.

You can pre-order your copy of Mysticism and Materialism in the Wake of German Idealism by clicking right here.

David W. Wood (Leuven) has done my co-author W. Ezekiel Goggin and me a great honour by blurbing our book Mysticism & Materialism in the Wake of German Idealism (Routledge, 2022). When you write an adventurous book like this, it’s an exciting but also a daunting prospect. Receiving such encouragement from someone like Dr. Wood really drives home the fact that this was a worthwhile project. I’m eagerly looking forward to seeing what other folks will have to say about the ideas & arguments we’re putting forward here.

The book publicity tour begins (or continues?) next Tuesday at a talk hosted by Concordia University of Edmonton (@CUEdmonton). I’m looking forward to sharing some of what Dr. W. Ezekiel Goggin (@w_ezekielgoggin) & I have been working on. Pre-order your copy of Mysticism & Materialism in the Wake of German Idealism from Routledge Books (@routledgebooks) by clicking on this link right here.

And here’s a snippet from Ch. 2 of our book, from which I’ll be reading aloud on Tuesday. It deals with ‘mysticism’ & mining (yes, as in actual resource-extracting mines!) in early nineteenth-century Europe. The quote from Baader offers us a nice reminder that the rhetoric & reality of mining often overlapped. 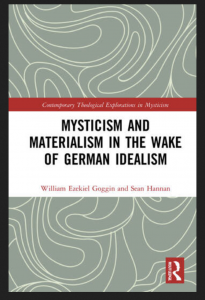 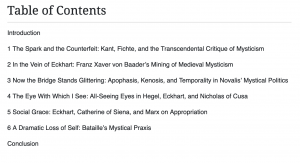 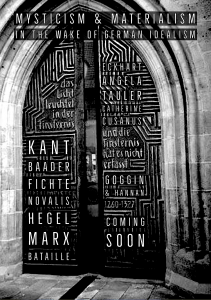 My co-author W. Ezekiel Goggin & I are pleased to report that our book Mysticism & Materialism in the Wake of German Idealism has been given the green light to proceed to the next stage of publication. We’d like to thank our contacts & editors at Routledge, who have been so helpful throughout this process. Over the next month or so, Dr. Goggin & I will work on final revisions in light of the reviewer comments. If all goes according to plan, the book should come out in print sometime during the early months of 2022.

In the meantime, here’s a sneak preview of the table of contents: 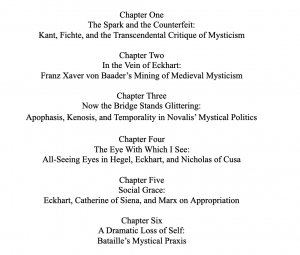 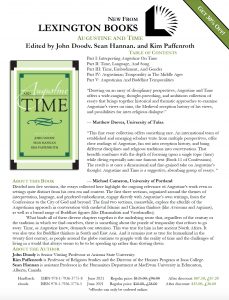 Here’s a brief description of what we get up to in this volume:

This collection examines the topic of time in the life and works of Augustine of Hippo. Adopting a global perspective on time as a philosophical and theological problem, the volume includes reflections on the meaning of history, the mortality of human bodies, and the relationship between temporal experience and linguistic expression. As Augustine himself once observed, time is both familiar and surprisingly strange. Everyone’s days are structured by temporal rhythms and routines, from watching the clock to whiling away the hours at work. Few of us, however, take the time to sit down and figure out whether time is real or not, or how it is we are able to hold our past, present, and future thoughts together in a straight line so that we can recite a prayer or sing a song.

Divided into five sections, the essays collected here highlight the ongoing relevance of Augustine’s work even in settings quite distinct from his own era and context. The first three sections, organized around the themes of interpretation, language, and gendered embodiment, engage directly with Augustine’s own writings, from the Confessions to the City of God and beyond. The final two sections, meanwhile, explore the afterlife of the Augustinian approach in conversation with medieval Islamic and Christian thinkers (like Avicenna and Aquinas), as well as a broad range of Buddhist figures (like Dharmakīrti and Vasubandhu).

What binds all of these diverse chapters together is the underlying sense that, regardless of the century or the tradition in which we find ourselves, there is something about the puzzle of temporality that refuses to go away. Time, as Augustine knew, demands our attention. This was true for him in late ancient North Africa. It was also true for Buddhist thinkers in South and East Asia. And it remains just as true for humankind in the twenty-first century, as people around the globe continue to grapple with the reality of time and the challenges of living in a world that always seems to be to be speeding up rather than slowing down.

Our Table of Contents runs as follows:

And for those who made it all the way to the bottom of this post, here’s a special discount code: 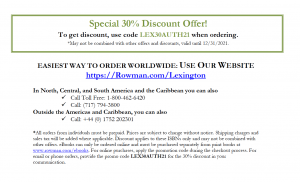