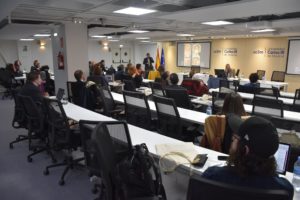 I’m happy to report that last week’s Lived Ancient Religion in North Africa conference went off without a hitch. Hosted by the Universidad Carlos III in Madrid and organized by Valentino Gasparini & Maria Fernandez Portaencasa,  the event gathered archaeologists alongside historians of both the material & textual records in order to better understand ‘religion’ as lived praxis in Roman Africa, Numidia, & Mauretania. Here’s a link to LARNA’s FB page, from which the above image was taken.

My paper, “Optatus of Milevis & the Improvisation of Universalism,” sought to read Optatus’ anti-Donatist writings as an example of lived religion and improvisatory praxis in late antiquity. While Augustine of Hippo is usually (& not wrongly) regarded as the theorist of Christian universalism against the Donatists, Optatus pre-dates Augustine as a universalizing force in North Africa. Unlike Augustine, however, Optatus does not begin with theory & end with praxis; instead, he begins with the practical situation & arrives at his universalist commitments on that concrete basis, thereby more effectively speaking universalism into existence for his audience.

Eventually, the conference proceedings will be coming out with Brill. The next task for me, then, is to turn this 20-minute talk into a more substantive chapter, perhaps by elaborating on the methodology of “lived religion” as articulated by Jörg Rüpke in light of the work of Michel de Certeau.