This past August, I delivered research talks at Oxford University and the University of Aarhus in Denmark. The first was entitled “The Enforcement of Violence & the Force of Love in Augustine: Epistle 93 & its Aftermath,” while the second was called “Love as a Violent Force in Augustine & Hannah Arendt.” 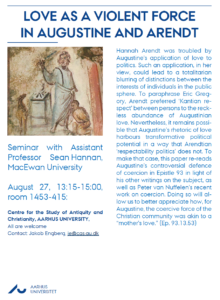 The papers were spiritual siblings: the first explained the short-term effects of Augustine of Hippo’s fifth-century call for coercive force to be used in the maintenance of community among North African Christians, using maternal love as a model. The second then linked Augustine’s views up with modern debates in political theory about the proper relationship between the use of coercive force and the rhetoric of love.

Special thanks go out to the organizers of Oxford’s International Conference on Patristic Studies & especially Anthony Dupont (KU Leuven) for running the colloquium on “Emotions & Rhetoric in Augustine.” At Aarhus, I’m indebted to Miriam DeCock & Jakob Engberg of the Centre for the Study of Ancient Christianity. I’m hoping to get back to Denmark soon and am cautiously optimistic that a brief version of the argument I debuted in these papers will be included in a future edition of Studia Patristica.